Ways to NOT spend money. 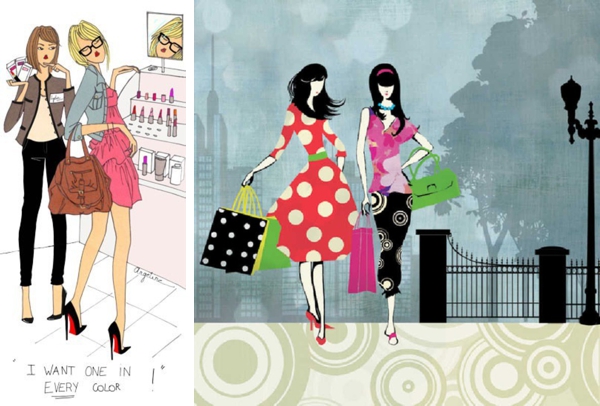 In a world where many are encouraged to want, obsess, or buy stuff, here is a post to help you do the opposite. Sponsored by no one.

A list of ways to not become a hoarder, justify buying dumb things, spend all your money on nothingness or get clothes you'll never wear...

Remember, there are exceptions, but if you let it- the list can help you.
-written by a person who has experienced overflowing craft closets, unworn clothing with tags still on them and opening a million online shops to rid of these purchases.

FINGERS ARE POINTING TOWARD THE SCREEN... (these are my real experiences)

1. When purchasing anything you are unsure of if you say to yourself, "I can always sell it"... don't get it. You're already planning it's temporary stay in your life with that thought. Sure, you can always try to sell something, but usually if it ends up annoying you or cluttering your life - and you can sell it, you'll most likely sell it for less than you bought it because you are eagerly ready to rid or no one will buy it full price, THUS, it's not a good deal.

2. "I like the way it looks, but don't like the way it fits." If it's the prettiest pattern or style- but makes you feel 10 lbs heavier, or gets stuck on your curves weirdly... then you won't wear it, or you'll wear it and feel unattractive in a pretty pattern.

*this is key to good fashion sense! If it's a style that doesn't look good on your body type it's not for you, which also means the opposite can be true- if it doesn't "seem" like your style but looks awesome on you, you might really enjoy wearing it.

3. "This would be really cute if I just..." took in the sides a little and made it shorter. Unless you are a DIY seamstress queen that usually does projects like this- you'll probably just have a baggy dress in your closet or in that special sewing basket- waiting for a makeover until you give it away to goodwill.

4. "But it's from anthropologie!" Anthropologie has an enchantment of dream-like nostalgia where people wear $100 underwear with buttons on the sides and uncomfortable lace bras that will fall apart later. But with those glowing Volcano candles, exquisite handmade crafts hanging from the ceilings, for some reason the urge to spend money happens- and it happens strongly. The sale table suddenly becomes affordable and that miniature notebook with the knife and fork on it, on sale for $7.95 seems so worth it. But when you go into that crowded room, sweating with the strangers teeming the racks of clothing marked 40% off- your judgement can cloud- or you can actually pass out from all the people or collapse by someone hitting your ankles with the stroller they're trying to wedge through.

My tip- when I'm in anthropologie and I find something on sale that I think I like I say to myself, "if I found this SAME exact item of clothing at Target, would I buy it?"

5. "I bought it at a thrift store!" Thrift stores are the scariest because you are thinking you won't spend a lot of money because everything is so cheap. But that's also a great way to get a whole bunch of cheap sh*t you don't need too... I once bought a giant, old fashioned record player for $50.00 because it was so cool. But I didn't have one single record so it sat on the floor as an awkward table in my first apartment until I got two records that I never listened to and realized this was the last thing my tiny little home needed. But it was so cute and old and thrifty... and a waste of space. Or sometimes you might see a bunch of random stuff you don't need, like a collection of vintage mismatched cups, or cute little things and you'll buy them because they are only $1.00 a piece. But then you've just spend $10 on a bunch of plates that you don't need, but bought because you were at a thrift store and felt like it was ok. Side note: I ain't knockin thifty finders, it can be an artform... just mentioning the danger of the thrift store urges.

6. "I'll give it as a gift." This one is tricky- because sometimes you see a good deal and know you can give it as a gift... but sometimes what can happen is you stock up on random gifts for people and when it's time to give a gift- it may not make sense with that person's life, or you think of something else that would be way better to give instead of this random set of cards you found for a "good deal" probably at anthropologie ;). I still do this one sometimes, but I have to be very shrewd with myself and make sure I'm not just wanting to buy something because it's SUCH A GOOD DEAL- but rather because it will be a great gift for someone.

7. Beware of the "excitement purchase." This has happened to me a few times recently, even though I had already told myself to beware. An excitement purchase is like a tattoo you get when you're with a whole bunch of friends at myrtle beach and you want to do something crazy so all logic and permanency goes away in your brain and you spend your 20's on with a butterfly on your lower back, because you were excited. These kinds of purchases can happen in any excitable environment, particularly when you're traveling or on a special adventure. Something happens and you feel the need to let loose or you're in a big city where fashion is teeming so you buy something you will never wear at home but you feel like you'll just be the talk of your friends with those shoes or dress... ahem. Like recently I was on a mountaintop with hippies and belly dancers at the largest yoga convention in the world and there was this booth that had original dresses and as I neared I told myself- beware of the excitement, but when the tiny blonde girl came near with her pachouli and strange hand sewn crafts something overcame me and I purchased a one of  kind indian dress from the 70's she had re-sewn herself. It was kind of expensive and I knew better, but as I whipped out that Canadian cash I felt the excitement leave my body into her hands and thought... It's not that the dress isn't cute, it's that I'll never wear it cause it doesn't fit my body cutely. Thus I disobeyed all the rules aforementioned.

8. But it's so cheap! or on sale You remember that rule about Anthropolgie... well I do the same thing sometimes in Target. I put something on and it's only $19.00 for a dress and I'm tempted but I say, If I saw this at Athropologie would I like it? For me, sometimes cheap means good. But over the years of having a lot of cheap things that I don't like I am learning to appreciate valuable things. Not expensive, just valuable. So instead of 5 pairs of cheap shoes, maybe I buy a pair of boots I adore that are a little expensive and then I wear them every day. I know in fashion life that's unheard of... but I literally wear the same few pairs of shoes for years until they fall apart. Every boot I own that I have loved ended it's life with holes in the bottom. This is far better than having so many cheap things that I bought for a good deal but that I didn't like it that much. (This one is hard for those of us who are thrifty in our blood by nature.) But I find having less things that are more loved is better than a lot of well... you know.

9. Which brings me to my last thought... if you buy something because it's SUCH A GOOD DEAL, but have absolutely no strong purpose for it- it's going in your hoarder closet and you know it ;)

BE STRONG! Don't buy stuff you don't need anymore! Live simple, live happy and get things that have value to you, look good on you and that make sense with your goals... not because they are a cheap fix to your want for something.
Email ThisBlogThis!Share to TwitterShare to FacebookShare to Pinterest

Love this! It's so hard to try to simplify your life while it seems every one else in is showing off their amazing finds. And I love that this is sponsored by no one! :)